Just want to chronicle a few of the moments that made Breath of the Wild special to me.

I was terrible when it came to combat early on.  I just spammed attack while taking a lot of damage.  It felt clumsy, like I just woke up after 100 years or something.

It was enough to progress with the story, enough to carry me to Kakariko Village.  I go straight for the shrine to unlock fast travel, and I get the most helpful shrine challenge: a combat tutorial teaching me how to jump attack, sidestep, and block.

I loved it.  It was perfectly timed too — a couple hours in after messing around on your own.  You have enough skill to scrape by, but now you’re ready to take on the massive adventure.

And guess what? You’re in Kakariko Village, where you learn of the backstory and your quest to restore the Divine Beasts.  I feel bad for those who didn’t manage to go here first.

Much, much later, like three main dungeons down later…

Figuring this out on your own without a guide is massively rewarding.  Move the camera around, you’ll see something that will guide you.

Spoiler Warning: Spoilers up through Chapter 9 of Death Stranding.

End of chapter 8. You’ve reached the edge of the world map, but your objective marker is even further out in the tar belt. What do you do?

Guess what, the game was priming you for this lateral thinking puzzle all along. What happens when you get inevitably captured by the ghosts?

You get stressed out by BB’s cries coming out of your controller. The landscape gets covered in tar, and time-shifted building rise up to provide you cover.

Buildings rising up out of the tar… fuck it, let’s intentionally get caught here. That surreal battle landscape suddenly becomes the way forward. Awesome! Solving this without a walkthrough was very rewarding.

The lead-up to the Chapter 9 boss is something out of a shmup.

The ten-story humanoid BT is just like fighting a Metal Gear. It’s rad.

Finally, after beating that boss, Higgs poofs away to the beach with Amelie in tow. Your mission objective is get to the beach, but how?

You start to walk back to the start of the map when Sam starts asking himself “how do I get to the beach?”

You know the answer, so you set back to the safe room expecting a cutscene to advance the story, but nope.

The game wants you to select the Fragile fast-travel option. It’s such a simple thing, but making the player press that button instead of just automatically playing a cutscene makes that feel more rewarding.

TLDR – Keyboard shortcut not working? Check other programs for global shortcuts. 8×8 Virtual Office binds Ctrl+H to hang up, and prevents any other program from using that shortcut.

(My mental process for fixing a minor but crucial shortcut)

Ctrl+H: the keyboard shortcut for Firefox’s History sidebar. Says so in the menu.

So why in the world did my computer stop recognizing this?

END_OF_DOCUMENT_TOKEN_TO_BE_REPLACED

Reposting TheBirminghamBear’s essay here because the cowards at Reddit tried to delete it.

“Shame is a powerful weapon.

Because listen – every human being has an innate and powerful need for purpose within society. For brotherhood and sisterhood with his fellow man. This is one of our basest and most powerful drives.

Shame is a good thing in a properly constructed society. Our laws can be seen as a sort of elaborate extension of the more base shameful acts that would exclude one from society. People who harm or steal from their neighbor are met with the scorn of their fellow people. And thus we develop laws forbidding that behavior.

The “social proof” – an advertising word that means demonstrating to a consumer that other people are buying or using the product, is one of the most powerful methods for getting someone to buy or participate, because people want to do what other people are doing.

So yes, use shame. You see Trump supporters are under the delusion, maintained in large part due to their propaganda networks, that their behavior is right and moral and that they are in the majority. Republicans even invented the term “moral majority” in the 70s to convey that sense of unity.

But they are not. They don’t realize they are on increasingly vanishing islands. They don’t seem to understand they have almost completely lost every younger generation of voters in existence, because of their horrible, hateful rhetoric.

That’s why you see them repeating these memes and pathetic jokes shaming millennials – as if there’s something genetically wrong with that generation. As if their generations didn’t have the responsibility for teaching and nurturing the young.

They see the shame and revulsion in the faces of their children and grand children, and rather than admit their mistakes, they hide deeper in delusion, deeper in denial. This is their weakness. That shelter is not impermeable. And when it cracks, when the real world finally comes rushing in to meet them, they will feel that hard.

Most of them are still high off the 2016 victory. Nevermind that they suffered a crushing popular victory loss to a fairly underwhelming and unexciting Democratic candidate by almost 3 million votes. That victory deluded them into thinking their movement was much larger than it was.

We bring them back to reality. We, the people. Yes, use shame. It doesn’t have to be vicious. Just show people that their hate will not be tolerated. Choose not to associate with people that espouse it. Speak up in public when they do espouse it. Ask them if they believe it is mature or decent to treat people the way the Trump administration treats people.”

This Lua script developed by Neill Corlett adds some quality of life features to the original Metroid.

The developer’s site no longer exists, so I’m uploading a copy here to help more people find this.

So there’s this problem where a WebForms app prompts me for a password when I’m logged in remotely: 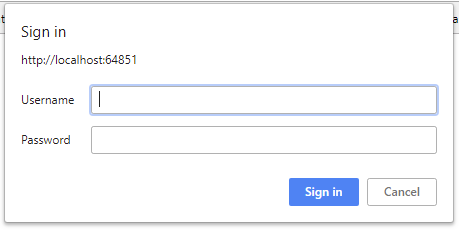 This prompt doesn’t appear normally, and it sucks because you can’t Google an answer for this one

Google’s no help on this, so let’s post the solution:
Uncheck the “NTLM Authentication” option and the password prompt goes away!